Ferdinand Hennerbichler:
The Origin of the Kurds

New study, concluding: oldest forefathers of Kurds were mainly not of Iranian origin but descendents of aboriginal Neolithic autochthonous indigenous peoples in Northern Fertile Crescent areas of the Near East and Eurasia B.C.E.

Forefathers of Kurds were for the most part ethnically made up of Neolithic aboriginal Northern Fertile Crescent peoples and of Indoiranian speaking emigrating elites from Central Asia. According to recent research of Palaeo/Archaeo-genetics and DNA Genealogy, forefathers of Kurds were in their earliest traceable origins mainly descendants of Near Eastern and Eurasian indigenous aboriginal peoples, predominantly oldest Neolithic farmers and shepherds who cultivated areas of the Northern Fertile Crescent ca. 10,000-5,000 B.C.E. During the last millennia B.C.E. these aboriginal Neolithic forefathers of Kurds were linguistically Indoiranianized by emigrating militarily organized elites from Central Asia in two waves: between 2,200/2,000-1,600 B.C.E., via the Russian plains into Eastern Anatolia, Northern Mesopotamia and Zagros mountain regions, and ca. 800-600 B.C.E., mainly via the Iranian Plateau into Northwest Iran of today (Anatole Klyosov). This waves of migrations contributed to multi-ethno-cultural societies of Northern Fertile Crescent aboriginal forefathers of Kurds and of militarily organized elites who came from central Asia and who obviously imposed Old-Iranian on the indigenous populations from territories of the Northwest-Iran of today.

Previously, Kurds spoke an unknown assumed Proto-Non-Iranian language (gernot Windfuhr). Hurritian played a dominant role in Kurdistan during ca. 1,000 - 500 B.C.E. (Ran Zadok). The first stages of the language of Iranianized Kurds could go back to the pre-Median or pre-Achaemenid periods (Gernot Windfuhr). An earlier influence of Old-Indo-Aryan-speakers in the ancient kingdom of Mitanni during the 2nd millennium B.C.E. is disputed.

The word Kurd itself could mean mountain people, frequently complemented by various attributive expressions for war-like mountaineers. Oldest roots of the term can be traced back to the Sumerian assumed word stem kur denoting various mountain peoples and lands. In cuneiform sources related terms are frequently used for mountaineers who inhabited ancestral homelands, which traditionally encompassed areas stretching from Eastern Anatolia via Northern Mesopotamia to Zagros regions and eastwards into Northwest-Iran of today. Also, since the 23rd century B.C.E. existed a steady but fragile, waxing and waning continuity of kur stem term labels characterizing various mountain people. Some of them can be convincingly and in continuity allocated to descendants of aboriginal forefathers of Kurds like Kurda (passim), Karda (ongoing discussions) or kurti.

In conclusion, this new book tries to prove that Kurds are an independent autochthonous people mainly from areas outside of Iran of today. The published results triggered a lively on-going scientific discussion. Reactions so far are mostly positive. 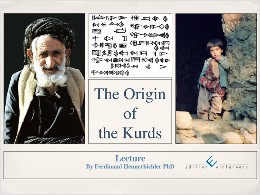