Current state of research based on inter-disciplinary findings of:

NOTE: DNA data quoted in this inter-disciplinary study have been used in a twofold counterchecked way, where as a matter of principle DNA findings (Palaeogenetic Evidence) from archaeological sources including skeletons of dead people formed the basis and were only later linked to specific typical modal DNA genealogy profiles of people (speaker of the „Kurdish Complex“) living today. In no way were interpretations and conclusions of the DNA research data presented in this study based exclusively on people living today without correlation to available DNA findings from ancient archaeological sources. Therefore, no attempt was made in this inter-disciplinary study to try to prove history of the past (exclusively) with data of the present. Rather, DNA genealogy profiles of people living today were only used and interpreted as indications for historical processes within the framework of available basic ancient data including archaeological ones. By that indicating that science of history is comprising a broad spectrum of disciplines spanning from archaeology to contemporary history. 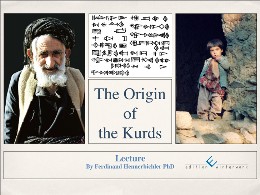